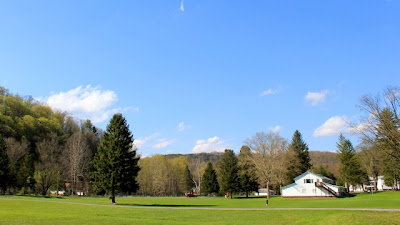 Every Year, the juniors and seniors at NTBI are given the option of taking a 1 credit course on Tribal church planting over spring break. We decided to go for it! On our Wayumi adventure, set on an 100-acre campus in central Pennsylvania, we explored what the Bible teaches about reaching every tribe, tongue, people, and nation of the world. We also experienced learning a tribal language, and connected with veteran tribal church planters. We saw and felt a little of what it takes to make disciples in a tribal setting where there is no alphabet, no Bible, and no light of the gospel. 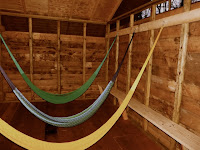 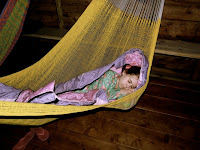 We enjoyed sleeping in hammocks at the jungle camp! We learned from experienced hammock users that if you sleep diagonally, the hammock loses its sag. You can see how flat Nicole is laying…pretty cool! The thunderstorm that night, unmuffled by the thin walls and screen windows, was the perfect soundtrack as I fell asleep praying and thinking about the joys and challenges that lie ahead. 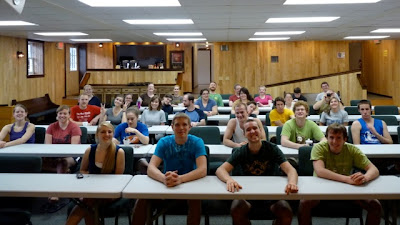 We spent 4 hours every morning in the classroom learning about things like the biblical definition of every ethnos, animistic religions, chronological Bible teaching, pre-evangalism, language, culture, Bible Translation, teamwork, etc… In the afternoon, we spent another 4 hours engaging in culture and language study in “The Village“, and enjoying recreational activities like hiking and skeet shooting.

Our day in “The Tribe” was exciting and informative. We all knew that the “tribal people” in the village were veteran missionaries, but when the lights are down low, the room is hot and humid, there are jungle sounds, and people are talking to you in tribal languages and acting the way people of the culture they are representing act, it was surprisingly realistic. It’s not uncommon for people in the program to think that these are real tribal people. Kristi and I are very intrigued by the phonetic alphabet. This system provides a symbol for every sound found in all the languages of the world. The Yanomamo language we were studying has 14 vowel sounds, and the Joti language has over 50 ways to say the pronoun “it” which relate to the objects color, texture, smell, etc…. Once a very educated, experienced linguist, when translating Genesis, accidentally had translated “God created the heavens and the earth sometime in the last 20 years, and I watched him do it”. There were 2 mistakes made. The first was they had discovered only 3 of the 4 past tenses. The second was they were unaware of witness markers. Later it was discovered that a different word fixed the whole verse. This single word meant “in the past, way back there, a long time ago, and I didn’t see it”. 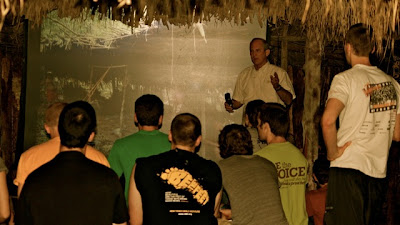 A Missionary shares his experiences working with the Yanomamo people. He worked in one small village, but the Yanomamo language group consists of an estimated 20-30,000 speakers spread across over 22 million acres in Brazil, and over 19 million acres in Venezuela. Missionaries first entered Yanomamo territory in the 1940’s, and there are now several amazing stories of how the gospel of Christ transformed Yanomamo individuals and villages in books like Culture Shock (by: Margaret Jank) and  Spirit Of The Rainforest (by: Mark Andrew Ritchie).

We butchered a pig on the last day (I’ll spare you the gory pictures) and cooked a traditional “Mumu” dinner Papua New Guinea style. One problem…no fresh banana leaves to cover the pork and sweet potatoes in the smoke-pit, so we had to use tinfoil instead.

We enjoyed our try at skeet-shooting. Kristi and I had fired a shotgun a few times before, but it was a first for the kids. They both did great, and were very proud of the bruises they got on their shoulders. I love the pigtails and shotgun look Nicole is going with!

Nicole and I went on a 3 mile hike and saw several waterfalls. 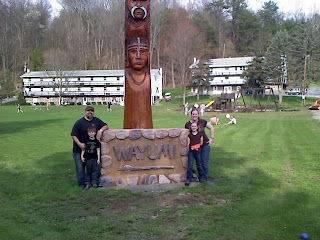 We learned so much and had a great time on the trip! The programs Wayumi offers have the feel of a week-long or weeked summer-camp or conference with a missions emphasis. I would highly recommend this program to churches, youth groups, and anyone interested in learning about the incredible ways God is using people like you and I to take the good news to every tongue, tribe, people, and nation! (Rev.5:9)