“What’s wrong with Iris’ eyes? Is she cross-eyed?” The question came from the sweet little daughter of a fellow missionary, squinting up into the sun at Iris as I held her. Her innocent little question was not the first time I had heard it and only echoed what we ourselves had been wondering about Iris for the last eight months. What is wrong with Iris’ eyes?

Only a year ago, Iris had passed a basic physical with flying colors and everything was grand. A few months later we started noticing her left eye going “off” sometimes. At first it was very rarely and we dismissed it as nothing, as the months went on it did not get better. Naturally if we were in the United States we would have dashed to the nearest ophthalmologist right away and gotten to the bottom of it. Out here our options our limited. We tried to have Iris checked in our provincial capitol by an eye doctor there but she was not an expert and could tell us no more than what we already knew, that there was a problem. After consulting two experts via email we concluded there was nothing to do but wait some more, watch her closely and of course pray that she would just get better or grow out of this lazy eye thing. 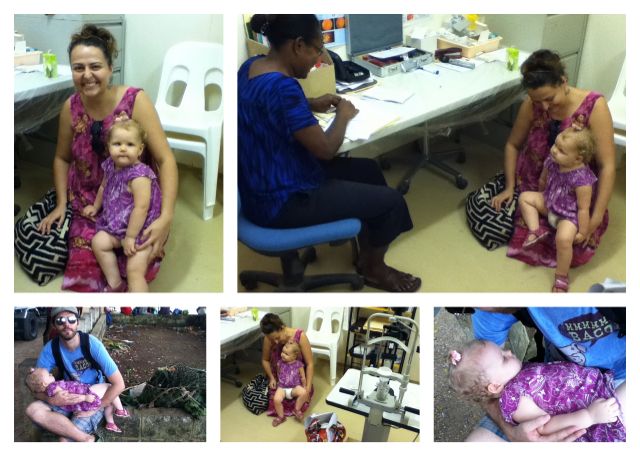 As we kept close tabs on her eye it became clear over several months that it was getting progressively worse and in early May our mission doctors recommended that Iris must be seen by an ophthalmologist as soon as possible. I would be lying if I said this advice did not threaten to put our hearts in a bit of a panic and I did have a bit of trouble getting to sleep that night imagining my sweet baby having to have her eyes operated on… or something. Horrid. Many prayers in which I repeatedly told the Lord that I trusted him with my baby finally got me to sleep. 🙂

I will not bore you with too many details but suffice to say that finding an ophthalmologist is a bit complicated out in our “neck of the jungle.” ;D After a bit of checking around and several emails, we discovered that there are only two ophthalmologists in the whole country! Both of them are located in two separate regions, neither of them ours. Hmm. Not to worry though… or so we told ourselves as we trusted God. Isn’t it awesome how our Father knows everything and can anticipate our needs before we even know them? This was one of the many times God totally took care of things. Turned out that one of the ophthalmologists “just happened” to be located in a city we had already bought tickets to go to, tickets that would take us to our annual regional conference in only a few short weeks. Also- when we purchased our tickets it ended up making a lot more sense for me to fly ahead of Tom with the kids in order to save us a lot of money with a special ticket price that presented itself. We snatched up the deal not knowing at the time that those tickets would place me in the area for the exact amount of time we would need to have Iris seen by the ophthalmologist before our conference started. Uh yeah… crazy amazing. Thank you Lord!

There were other little details that all made it really incredible, too. Little things like a really helpful expatriate ophthalmologist who helped us a ton over email getting everything lined up. Getting a phone number that was actually current and working (this might not seem like a big deal in America, but in this country this is a BIG deal! :D) AND after only three tries the ophthalmologist actually ANSWERED his phone! Wahoo! Things were falling into place! 😀 So the plan was to have Iris checked by this ophthalmologist and get some sort of diagnosis so that we could make a plan B to help our sweet baby girl. I was so thankful that our partners the Bealls were already at the regional support center when I arrived in the other region and they were able to help me significantly with Jude while I took the trips with Iris into town for appointments with the ophthalmologist for two days. I could rest knowing Jude was having a blast and was in good hands, so I could just focus on what Iris needed. The PNG ophthalmologist was very kind & professional, I was very relieved to see that his “eye clinic” though located within the premises of the main “Haus sik” (Hospital… not the cleanest of places…) was its own separate building, out in a field of grass, with tile floors, working fans, a no shoes policy AND it was CLEAN! Oh thank you Lord.

He was very kind to Iris and made us both feel at ease as he ran tests on her eyes involving strange machines and gadgets pressed against her face, shining lights and instruments. I was so proud of Iris. 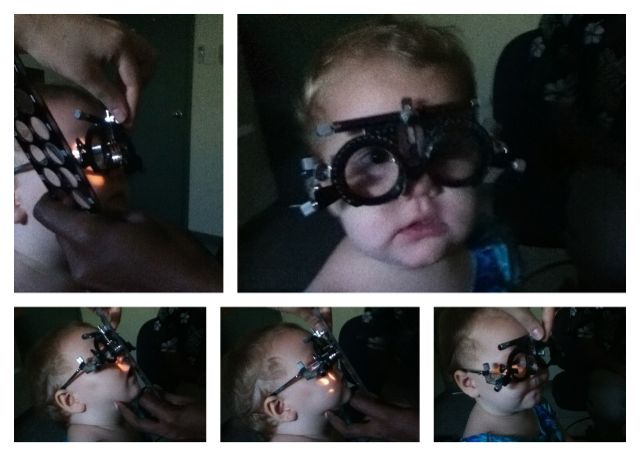 She did so well! She didn’t throw a fit, she listened to my comforting speeches, obeyed what she was told and stayed calm as so many things that could have freaked a grown up out were done to her little face. *love my girl* Of course Iris was rewarded with ice cream for her good behavior. 🙂 After two days the doctor felt confident of his diagnosis. Iris does not need surgery… at least not for now. There are a few things we can try before we get to that option. Both of Iris’ eyes need to be strengthened and we will proceed with patching her eyes for

the next three months. One eye will be patched for three days, then the following three days we will patch the other eye. And so on, for three straight months. This will hopefully force each eye to strengthen it’s muscles and learn to work on it’s own and not rely on the other eye. After three months time, I will need to return with Iris to the ophthalmologist for him to do a follow up appointment and see if there has been any improvement in her eyes.

How are we feeling about all this? Well, we are praising the Lord for this counsel and for the blessing of knowing what we should be doing to help Iris. Honestly though, this is hard. This will be a long three months, I think. We start tomorrow with the patching and it will not be easy. Iris is almost two and she is at a place in her development that she can recognize that having one of her eyes covered is completely obnoxious and not fun. I don’t blame her one bit- I would hate it, too. Previous attempts at getting her “comfortable” with the patches have resulted in many tears and only one time in a happy agreement to wear it because she was dressing up like a “Pirate Princess” and Mommy was going to take her picture. 🙂 Once the picture was taken, she was done. 😛 So, the following weeks will involve MUCH Pirate Princess story telling, training, many rewards for wearing her patch faithfully and a lot of prayer. This process is a very scary one in some ways because if done wrong the brain can actually be tricked into thinking one eye is non-functional altogether and “shut it off,” in essence blinding that eye. So, we are a bit nervous but we are proceeding with trust in what the doc has instructed and trust in our Father to care for Iris’ eyes and help this step of patching our little princess to work!

We would really appreciate your prayers for Iris and us during this time. Especially me as I will be supervising Iris daily in this patching process. Pray for a miracle and that Iris will somehow love the patch, not fight it and that I will be able to go through days in the next three month’s that can allow other productive activities outside of holding a patch on Iris’s face! I am intimidated at the thought of how much time and energy this might take. No doubt it will be hard but naturally I will do anything to help Iris.

Who knows what is ahead for Iris and her beautiful little eyes but we are resting in the caring arms of our Father and thanking Him for all the ways He has guided us so far in caring for her. It’s nice to know that He loves her even more than we do!