Last week we once again had the privilege of teaching at Radius International in Tijuana. There are 11 students there this year, all being trained to go to the hard places of the world, and take the name of Christ to Unreached People Groups.

They are also being taught how learn the Heart Language of the people to whom they will minister, and that’s where we come in. This semester Bill taught a 10-hour course called Form and Meaning.

Form & Meaning? What does THAT mean? Glad you asked…

Missionaries have the most important message in the world (that’s the “meaning” part.) They want to communicate that message clearly. But that’s not so easy. To have effective cross-cultural ministry, they need to be trained about what to say and do (that’s the “form“) that will clearly get that message across.

The trouble is, people around the world communicate meaning in different ways. Each language and culture has unique forms to share a particular message. Sounds, words, letters, grammar, gestures, even acts of friendship… all are forms that communicate very different meanings.

THERE IS NO UNIVERSAL WAY TO COMMUNICATE A PARTICULAR MEANING 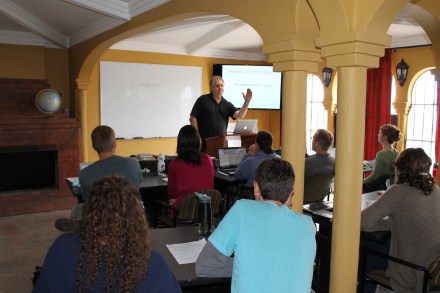 It’s All About That Meaning

Here are some fun examples of form/meaning differences:

And those are just the easy kinds of differences!

In each case, you would have to make some big changes to communicate what you meant to say.

THE FORM MUST CHANGE FOR THE MEANING TO REMAIN THE SAME

That is the lesson Bill was teaching the students. They cannot afford to “think English and translate.” They must learn to think about the meaning and communicate that in the best form. In the fall semester, Bill will teach them more about how to discover the underlying meaning.

It’s a joy and a privilege to teach these eager missionaries and to get to know them. Both of us enjoyed chatting with them over lunch and answering their questions about missionary life.

Oh, and by the way, lunch at Radius is always awesome: 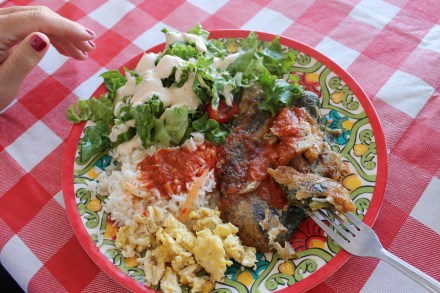 Thank God with us…